Ever wonder what Confederate money would have looked like?  In 1865 it would have become worthless.  Who might save some as a souvenir?  How about Federal soldiers who were making an unprecedented tour through the south to places like Atlanta, Georgia, and points to the east in Savannah.

General Sherman fought his way to Atlanta in September of 1864.  His goal to bring an end to the war included a strong desire to minimize harm to confederates.  Many, of whom, in the service with him and were pre-war friends.  He wanted to win the war, preserve the Union, and curtail battlefield slaughter.

To accomplish his goal, he had to convince the south that continued warfare was not a path to victory, but to the destruction of the south.  He would invoke a form of war that would generations later be referred to as “shock and awe” warfare in the Iraqi freedom operations.  Only at that time it simply was called “Destructive Warfare”.

Sherman sought to convince the south that they could not win the war, and that their army could not protect them from the Federal forces.  Amongst his forces was the 19th Michigan Infantry of Branch County.  The 19th had been captured, and in turn, released for the return of Confederate officers and troops in 1863.  In April 1864, the reorganized 19th unit was ordered to McMinnville TN where they became part of Sherman’s forces headed to Atlanta.  Col. Henry Gilbert, Coldwater citizen and in command of the Michigan 19th would be mortally wounded before they reached the Georgia border.

In November of 1864, the Branch County Infantry unit would be housed in the city of Atlanta.  They had lost many men in the battles through the Confederate state.  Once they had achieved their goals through Savannah in December, they would turn north and march through the Carolinas and Virginia into April of 1865.  They reached Alexandria Virginia in May of 1865 where on the 24th of that month they would victoriously march through Washington D.C.

Some of Lucius Wing’s souvenirs included a $20 Confederate bill as well as a 50-cent note and a 25-cent note.  So, if you have ever been curious about Confederate money, here are three incredibly old pieces of currency. 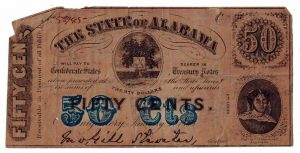 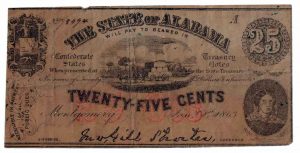 THE DOG WITH THE BROKEN TAIL